About a month ago, I received an electronic missive bearing some ill news for me and my artistic kin. Star Clipper, a locally owned and operated St. Louis comic store, announced that it was going out of business.

When people first found out, it was like a massive outcry that spread throughout the St. Louis community. In the days after the announcement, people flew into the store in droves. Some, as one might expect, came as carrion birds, coming in search of a bargain from the still warm body of the store. Most, however, came as a surge of healing hands to apply pressure to the wound in the hopes of staving off death until a miracle could occur to save Star Clipper’s life. Sadly, while their intentions were noble, it would do little good in this case. Star Clipper was closing its doors for good in the very near future, and the Delmar Loop would never be the same as a result. 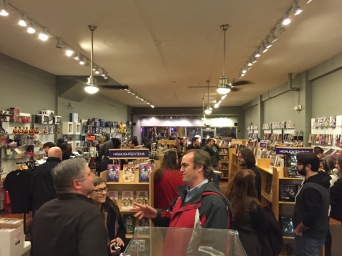 Star Clipper will always have a special place in my memories. It’s where I bought my first comic book and it’s where I bonded with one of my first true childhood friends. It’s also where I got my first real job, published my first story (with Ink & Drink Comics), and wrote my first blog post for the store’s website (many of which I reposted here later on). I’ve been a loyal customer for almost twenty years and an intermittent employee for six, and suffice to say it’s hard to see the place go.

However, Star Clipper was more than just a comic book store. It was an outlet for the local literary and artistic community. Local comic artists, some young and starry-eyed with dreams with hitting it big, and others who just wanted to make a little money doing what they love, could come in and sell their work on consignment. On the first Saturday of every month, local artists would come to sit in the store to draw sketches for tips. And during the big events, like Free Comic Book Day, the store would become an colorful extravaganza in which comic artist, cosplayers, and even musicians who specialized in off-brand pop-culture music would come and paint the store in a joyous cacophony of independent creation.

As its final days tick away, I mourn the loss of one of the city’s best outlets for creative expression, and wonder where I will go when the world of storytelling starts to seem too routine and monochrome. I worry for my friends and former coworkers, several of whom worked there many years before I did, and remained when I left. These are people who put long hours and effort into creating something that they believed in, a symbol that stood for something great, something that St. Louis still needed, and in a few weeks that symbol is scheduled to fade away.

Science has proven that many of the stars we see in the sky today actually died long ago, and their light is only just now reaching our little section of the universe. This star may blink out in the next few weeks, but here’s hoping that the light and warmth it emitted will still be seen and felt in the memories of those it touched for some years to come. I can only hope that it will keep us warm just long enough for a new star to be born.

Blog at WordPress.com.
The Wilde Side