As the clock ticks down towards the inevitably tumultuous beginning of the boon and bane to writers known as National Novel Writer’s Month, it helps me to reflect on my work habits; what works, what doesn’t, and, perhaps most importantly, what has worked for others.

No matter how you look at it, a writer is nothing without their influences. This is a simple and inescapable truth, whether you believe that the best way to grow as a writer is to learn from the experienced greats, or learn what not to do from those that have stumbled before us. For me, however, there has been one role model that has stood out among the many others I’ve learned from, and that is the esteemed and astounding Neil Gaiman.

What brings about this sudden shift in tone, you might ask? Well, let me direct your attention to this little gem of a panel below…

This is a panel from Volume 3 of Gaiman’s infamous Sandman series, also titled Sandman: Dream Country. It’s one panel of a powerful story in which a desperate writer cruelly holds one of the greek muses, Calliope, captive and forces himself upon her to grant himself inspiration. Yet, to this day, the thing I remember most about this story is contained above: “Come here, Gorgeous. Let’s make two and a half minutes of squelching noises.”

EDIT: I later learned this was a quote from John Lydon, back when he was Johnny Rotten in the Sex Pistols. The original line was, “Love is two minutes and 52 seconds of squelching noises.” It’s an ironic reference, considering the relationship between Calliope and her captor is anything but loving.

There’s a strange forced light-heartedness, an absurdity, in the way the line is thrown in there, as if the character is trying to convince himself this is all good and fun, and he isn’t about to do something horrible. It almost feels like it shouldn’t work in the story, that it is absurd in some way, but it does, and it isn’t. There aren’t many authors out there that could pull this off. Gaiman is one of those few.

Probably the best part about it is that Gaiman doesn’t always use his words and references to make a specific point. When asked about similar choices, he has even said he did it because he felt like it at the time. 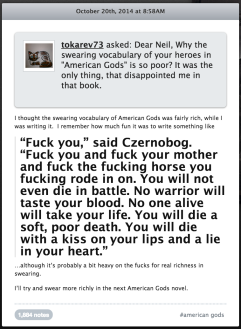 Recently, as part of a fairly interesting debate on Tumblr, someone questioned him about the “poor” swearing vocabulary in American Gods, and his response (or at least the best part of it) was that he mostly remembers how fun it was to write.

That’s it. It was fun. When you think about it, what better reason could there be when you’re choosing the words to tell YOUR story?

It seems so simple, and yet if you’re not careful, it’s so easy to lose sight of. Ironically, one of the greatest obstacles I have encountered as a writer is the struggle  to try and make every word perfect, instead of just the ones that seem fun and right.

So in the end, there are many reasons that I look up to authors like Neil Gaiman. His expansive ability to reach out to his audience, his unique and compelling writing style, and the way that he has expanded and built his footprint as an author are a few of the big ones. However, most of all I look up to men like him because he proves that being a writer isn’t just a practice, it is a life, and he has excelled at it with a smile and a wave every step of the way. 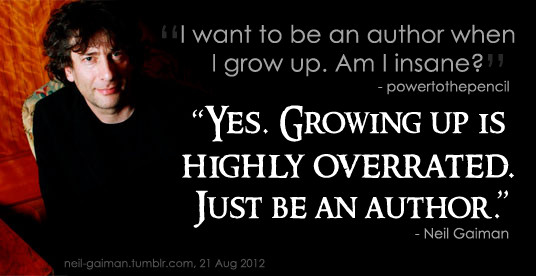 Blog at WordPress.com.
The Wilde Side