As the house lights illuminated the interior of the A.E. Hotchner Studio, a young man steps out onto the stage and finds himself awash in a sea of friends, relatives, and other well-wishers. The house is packed, every seat is filled, and he can’t go more than three paces without a hug, a handshake, or a pat on the back. Cary Simowitz, law student, literature buff, and playwright, is premiering his first play, Ekphasia, or (alternatively titled) “The Shadow Girl,” making him the man of the hour.

It is not very often that I get to experience some of the artistic talent from my hometown of St. Louis, but when the annual A.E. Hotchner Playwriting Competition rolled around, hosted by the prestigious Washington University, I found myself with a golden opportunity.

For those who are wondering, the A.E. Hotchner Playwriting Competition is an annual event named and endowed by alumnus, novelist, poet and playwright, A.E. Hotchner. This annual playwriting competition is open to all undergraduate and graduate students at Washington University. In fact, many past “Hotch” plays have gone on to full production in the PAD season and around the country. This year, Simowitz was one of three gifted students given the opportunity to showcase their work, and he was more than deserving of the opportunity.

The story of Ekphasia revolves around a 14 year old boy named Owen, who strives to lead a normal life while suffering from a debilitating mental illness. Every day he struggles to relate to and feel acceptance from the three most important people in his life: his older brother, his best friend, and his poetry teacher.

One day, while his class is visiting his teacher’s home for a poetry reading, Owen accidentally discovers that his teacher has chained his fifteen year old daughter, Julia, to a piano in his basement, and is holding her there indefinitely. Owen desperately tries to break her free, but even after repeated attempts to convince her to leave, she refuses. Giving up on his plans to rescue her, Owen develops a strange and (eventually) romantic relationship with Julia, and the story only intensifies from there. 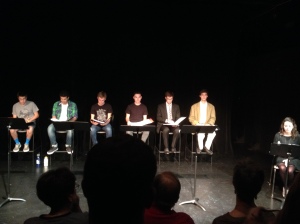 The play was exceptionally well cast and well acted, which is saying a lot because the entire performance was given script-in-hand. Revisions to the script had been ongoing until literally minutes before the audience filed in, the pages still warm from the printer. Yet despite less than abundant prep time, the readings were precise, the cues were spot on, and the reactions between the actors, even when forced to face the audience instead of each other, had an excellent chemistry.

Simowitz’s story was carefully crafted, and reminded me of what I would expect to see if someone mashed up the comedy of The Hitchhiker’s Guide to the Galaxy with the sinister suspense of Poe’s The Telltale Heart. However, in terms of plot, it reminded me more of a combination of Marie de France’s Lanval and M. Night Shyamalan’s The Sixth Sense. It’s the kind of story that makes you question the reality at its very foundation, yet whether your doubts are truly well-founded is only revealed in the final act.

Sitting in the audience, watching the story of a young man raging against the world, against the seemingly insurmountable obstacles that separate him from the woman he loves, and against the shattered pieces of his own psyche, I learned that even in a tale where so much is in doubt, the drama is irrefutably real.

On the Shoulders of Giants

Blog at WordPress.com.
The View From This Shore
The Wilde Side